One of my favorite movies is the 2013 film, The Conjuring. Based on a true story from the paranormal files of Ed and Lorraine Warren, The Conjuring tells the story of the Perron family. In the 1970s, the Perrons bought and inhabited an eighteenth-century farmhouse in Rhode Island, only to experience trauma and terror at the hands of dangerous demons. The Perrons finally called in paranormalists Ed and Lorraine Warren, who spent time with Roger, Carolyn, and their five girls before cleansing the home and performing an actual exorcism on Carolyn. 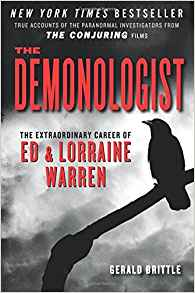 When the Perron’s lived in the house, the activity began with objects moving, then graduated to horrendous smells of rotting meat, and then actual contact with the demonic presences. The spirits seemed harmless at first but then began physically attacking members of the family.

In terms of the house’s history, a woman named Bathsheba is said to be the cause of the hauntings. In the 1800s, Bathsheba supposedly practiced witchcraft and performed satanic rituals in and around the house, which included sacrificing children by piercing their brains with a needle. Legend has it that seven children may have died in the house.
The Perrons moved out in 1980 and never suffered another paranormal problem. But according to reports, long after the Perrons left, the Rhode Island house remains haunted.

As of July of this year, the home has new owners. Paranormal investigators themselves, Cory and Jennifer Heinzen were drawn to the house positioned on 8.5 acres because of its peaceful and beautiful setting. The Heinzens are not afraid to live there but claim there is still plenty of activity going on. “Doors opening and closing on their own, footsteps, knocking (and) disembodied voices,” Cory Heinzen told a local Rhode Island reporter.

Heinzen also claims that not long after they moved in, a black mist gathered in one of the rooms. “It looks like smoke. It’ll gather in one area and then it’ll move.”

The Heinzens say they have seen lights in rooms that have no access to light and plenty of other things that have made them “jump.” They plan to renovate the house, film a documentary about it, and open it up to the public for tours. So in the very near future, you may be able to visit the house and see for yourself.

An interesting side note: The movie was not filmed at the real property, as very few are. But when James Wan, the director, was asked if he wanted to take a tour of the actual house in Burrillville, he declined. “I believe in ghosts, and the supernatural, and the spiritual world. But I don’t want to go there.”